I’m here at VMworld Europe in Cannes after a good flight with BA from LHR Terminal 1, very efficient bus transfer from the airport to the conference centre, turn left at the arrivals hall – or follow the people with VMworld signs – Microsoft take note; there was no shuttle bus the day before TechEd Europe last year when a lot of the people were arriving. 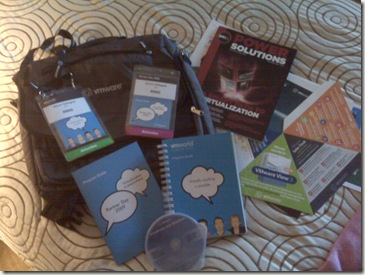 The bag is pretty decent – and has a metal strap clip, not the useless squeaky snappy plastic ones that you normally get at these types of event.

I have 2 passes, one for partner day (Monday) and one for the normal conference – there isn’t anything in particular to denote that I’m an “official blogger” so hopefully that won’t give me any issues getting into a lounge.

There is a shuttle bus service from the conference centre to the various official hotels, one hint though – when they ask what hotel you are staying at shout – the driver on route 3 seems hard of hearing as I had to tell him 3 times and still ended up being the last on the bus when my hotel was the closest 🙂

Hopefully able to go to the official Veeam party this evening to meet up with the twitter brigade and fellow bloggers.

Also need to go for a run and work off that sizeable lunch!

Addendum – I see from Eric’s video that I checked in at the wrong desk; might explain the pass thing 🙂