Bit of a diversion from the norm this evening, I attended an event called “The Fantastic Tavern” – which is a community focused series of events on a variety of creative and social-media type topics, as I normally live on the infrastructure side of bringing such concepts to life I thought it would be good to get a better feel for what’s coming and some of the thought behind it, oh yes and there was an offer of free beer and sausages…. how could I resist? 🙂

This evening’s topic was “2010 Trends – what’s hot and what’s not” and is set as a series of short 5 minute presentations by people in the creative industry – similar to the lightning talk format used at Cloudcamp. they made innovative use of a cool wall (Top Gear fans will know what I’m talking about :)) to rate the trends as hot or not through some alcohol fuelled volume based popularity measurement techniques (a.k.a shouting). 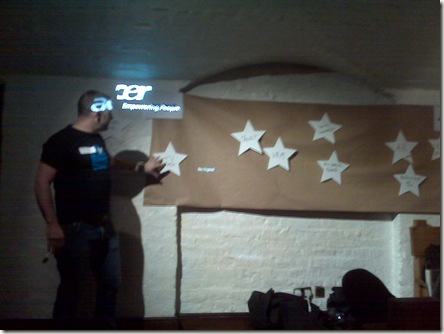 Augmented Reality – this is a really interesting technology to me, and he explained some the use-cases and examples of applications already available to find things like free WiFi or the nearest tube station in a visual manner – very clever stuff, I personally think this is a going to be big this year and next with the array of uber-smart phones like the iPhone and Android equipped devices with built in GPS/compass etc.

This video is a demo from one of the app makers..

Realtime – twitter, and other social networking sites have meant that information is out there very quickly for public consumption you can express your opinion brutally and loudly – this can have a big impact on brand image – poor service @your local Starbucks?, it’s all out there for people to search and read – instantly.

This can be risky – flippant, off-the-cuff remarks can have repercussions and it’s all to easy to broadcast something ill-thought out in the blink of an eye and regret it later.

Some people have used this as a great marketing hook, there was an example of a person in SF who sells Creme Brulee from a cart in the street; he has built up a massive almost cult-following by only announcing his location via twitter when we sets up, if this were “just a guy with a shop” would he have such a loyal and keen, repeat customer base? – he obviously makes creme brulee 🙂 but he has a marketing “hook”.

Behavioural Architecture this is a field of thinking being championed by Dan Lockton at Brunel university and I found it quite interesting, it’s about designing sites or services to make people want to use them, through some subtle social psychology; there was a good example of rewarding positive/healthy behaviour (like the piano stairs below) or features in facebook like the ‘like’ button and suggestions of things to do to engage further with your fb friends like completing profiles.

Playfulness – it sounds obvious but making something fun to use, encourages people use it, there was an example of Chore Wars which is an online game where you can gain a reward (points/stars/etc.) for completing chores – ideal for kids, make it a game, it’s less like work.

we need some of these where I live! 🙂

Truth – playing to the points of the realtime session and the concepts of citizen reporting, as an organisation it’s so easy to be caught out if you are not being truthful, you can be so visible online that any person can point out if you are being inconsistent and that can carry heavy damage. the realtime world also means we (the consumer) can be very intolerant where things don’t go our way, what customer service slights we may have previously just forgotten about and moved on from are now broadcast in CAPS and shouty !!!! to anyone that cares to listen, and more importantly it’s all there, on-record.

Transparency is becoming increasingly important and from my perspective movements like the blog with integrity programme are this in action; reputation is everything, and there was a poignant example of Tiger Wood’s recent fall from grace and the resulting fall-out

The 30-second TV ad is dead – argued the position that ad’s that are distributed online are much more likely to reach their target audience and get better engagement than the traditional linear 30-second TV advert.

I can see the logic to this, online ad’s can be made interactive and non-linear with click through and the ability to send to friends/share as this screen capture from YouTube illustrates

There was an example video shown of an interactive advert (with some naked people and strategic blue buttons that I couldn’t find online…:)) and a Toshiba advert that appears totally irrelevant to the product they were selling but got a lot of traffic.

Whilst it wasn’t explicitly mentioned this sort of model also has a much better way of measuring return on investment, you can very quickly get feedback on how well your ad is doing, click through rates, conversions to sales etc. – this is almost impossible with traditional linear TV advertising (although some of this is coming to more advanced IP-enabled STB’s)

Social Retail/Commerce – this was particularly interesting and one I have already been a consumer of; sites like Amazon make algorithmic recommendations to you, based on what you have viewed, social networks add a second dimension – social theory says that “people generally like people that like what they like” (try saying that after a few free beers !:)) recommendations from people in your “network” carry a lot of weight, and this is definitely something I have seen in the music space already.

Ratings and recommendations are also a key decision influencer, I always check out the reviews on Amazon, because they are from people (well, mostly from real people anyway).

Companies like yub.com and mflow take this a step further and offer to pay a commission on purchases that you recommend to your network (or are discovered through your network) – much like the Amazon affiliate system that I have used in the past on this blog, but extended into your social network.

His little friend Last up was Michael from Microsoft talking about the ways developments in mobile devices like pico projectors can be used to add an extra level of presence to social networking, using an example of your facebook friend being projected on a wall during a chat session from a mobile device, rather than just a normal small screen.

I had to feel for him as this is a highly visual topic but the promised internet access wasn’t available so he had to ad-lib it, but did very well.

Microsoft have some interesting demonstrations on this in Project Natal

In the end the result was that Playfulness/Fun was voted the hottest trend for 2010, personally I disagree – I think it’s going to be social retail/commerce and augmented reality as they both have a strong potential for quick and easy monetization, with the SixthSense stuff coming to fruition around 2013/14 – no doubt I’ll be wrong, but it’s very cool.

All in it was a fun evening, it’s quite refreshing that the presentations were entertaining and a lot less staid than the usual technical stuff I attend (we techies have a fair bit to learn about audience engagement during presentations), there was a liberal garnish of swearing too, which further goes to prove the truthfulness/honesty trend for 2010; if something is crap – tell it like it is and people will trust you 🙂

Next London event is likely to be in April, with an event scheduled in New York in early Feb, I highly recommend it!

2 responses to “The Fantastic Tavern: London”