I recently got a new laptop, an HP EliteBook 8530p; it’s quite a powerful machine and importantly for me has 8Gb of RAM and dual HDD’s which is very useful for the increasing number of VMs I have to carry around and run.

Rather usefully it comes with a built in HP un2400 3G modem behind the battery, this is a really useful feature and is better than the USB dongles you usually get as there is no chance of dropping the laptop and snapping it off or breaking the USB port.

Unfortunately I had several problems with the x64 Vista OEM build the machine was supplied with, after resuming from sleep it was unable to find the 3G modem and would stoically refuse to recognise that it had one installed or work at all after the 1st connection.

Some posts on the web indicate this was fixed with an updated version of the HP Wireless Connection Assistant so I installed v3.5 from this page and the updated HP Connection Manager 2.0 (default build had v1.1) that seemed to sort of fix the sleep/resume problem but it still wasn’t working 100%. A forum post led me to turn off this option in the HP connection manager application, but still no joy

I wasn’t overly impressed with the quality of the drivers so went on a hunt (as you do) for newer ones.

Oddly if you look at the normal HP driver download page for this laptop it only lists a driver from June 2009 which doesn’t work, after some investigation with the HP RomPaq download tool it seems there is a newer driver on their FTP site, just it’s not listed on the web page – this driver is the most recent one version – 3.0 (details here) (sp45888 driver download here)

On 1st attempt just running the .exe it still didn’t work properly and didn’t install the driver, I had to extract the sp45888.exe file and run the C:\SWSetup\SP45888\Qualcomm\QCUSBDriver\setup.exe file rather than the setup.exe in the root of the SP45888 directory as you would normally do.

This setup app gives you a UI and lets you choose the carrier and contract type.

Once this was installed it worked ok. not the best quality control HP! – hope this post helps someone else with the same problem. 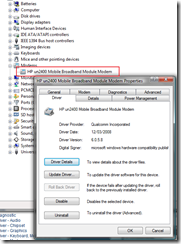 As a side note – HP do you really need to have this many 3rd party apps, tools and drivers installed (and requiring updates) in the OEM build!?

sure there is an updater utility… but that’s a lot of build maintenance for people running lots of these machines?