The Computing Super-Powers are Aligning Their Stacks

I noted with interest the rumours today of Cisco ceasing a long-standing partner arrangement with HP (more here); essentially locking HP out of special pricing and insider product information and roadmaps.

For a long-time HP have offered Cisco components for their c-class blade chassis like the 3020 catalyst blade switch; to infrastructure people like myself this offered the best of both breeds (compute and networking) in a nicely integrated blade solution.

With HP’s recent acquisition on 3Com and their existing HP ProCurve range I would hazard a guess that they will stop selling Cisco blade switches in future – I also note from an email that all HP partners got this week that all Cisco manufactured blade switch components were facing supply issues, stoking the fires somewhat to resellers to push the HP product with some choice anti-Cisco FUD which I won’t repeat here. 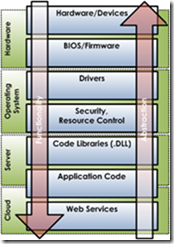 Integrated is the key point for me, if you are building infrastructure solutions you want something that has been thoroughly tested together, even if bits come from different manufacturers and follow “industry standards” you can’t beat a pre-packaged solution with proven support processes and management toolsets.

To my mind this is why Apple have always been so much more successful in the consumer space than Microsoft have; aspiration brand arguments aside, Apple have always maintained a tight grip on the end-end quality of components that go into their products (software, firmware, hardware, accessories) whereas Microsoft were born out of the opposite*;

Microsoft took the x86 PC out of the grip of it’s one-vendor supplier and inventor (IBM) in the 80’s and allowed it’s software to run on a wide variety of compatible, commodity hardware, providing API’s for thousands of independent software and accessory vendors to integrate their products with DOS and latterly the Windows OS.

Contrary to what many think (Apple included) Microsoft opened up the PC market to the masses by enabling competition – allowing the consumer to choose from devices that varied in quality and thus cost to match the needs and budget of the end-user – whilst Apple maintained a steady line of expensive/premium but excellent quality products.

In the longer-term Microsoft’s image suffered as a result of this “openness” because there was less (or no) quality control of what 3rd parties produced poor quality drivers, applications and hardware entered widespread use, and all that integration often ended up in a poor end-user experience; how many times have you been frustrated trying to get product X to work on PC Y with software from Z – you are relying on 3 different vendors, each with it’s own target market and user to all do their jobs properly, and to the standards they are given to work with (Win32 API etc.)

If you are a hardware company selling an optical mouse it’s a tight margin high-volume business so you don’t have a lot to spend on quality control or good coders – you want it “done” and shipped and get the profits in – or you may just be a fly by night company that wants to rip off consumers and make a quick buck, there is nothing really stopping you.

Microsoft took steps in recent years to address the poor-quality 3rd party stuff from tarnishing the mother OS’s image through the Windows Certified logo scheme, but they never took it as far as Apple; who refuse any code that is not blessed by their own quality control on devices like the iPhone – and look how it gets almost universal praise for it’s ease of use and reliability.

The ever increasing amount of crap-ware that PCs ship with is astounding – my new HP laptop ships with about 20 different 3rd party drivers and tools out of the HP box, Hawei 3G card, AuthenTec fingerprint scanner, ATI video card with it’s own software To boot, it would seem HP weren’t too diligent about their quality control either.

Now compare that to a MacBook Pro out of the box. Apple own the end-end process – you can only (legally) run THEIR OS X on it, sure they use things like Broadcom NICs and ATI video cards but because they control the OS as well as the underlying hardware they can ensure support is baked-in when it comes out of the box, as a result their test matricies are much simpler and the end-result is a much simpler and reliable end-user experience, they also reduce the bells and whistles to what people want (how many corporate IT departments really take advantage of the smartcard or biometrics support on modern PC hardware or the SD card readers, more often than not time is spent to disable such bells and whistles in the interest of support and not overwhelming end-users).

So, after that rather lengthy into back to my point – if you want something that is good quality and just works as a vendor you need a greater control of the whole “stack” – reduce the variance of components that make up each slice of the stack and the result is;

There seems to be a fair bit of consolidation in the market place at the moment with the bigger players announcing grand partnerships or simply making massive acquisitions.

Maybe some of the open market, where you could run Linux, Microsoft or something else on your XYZ server is being replaced with a premium/preferred “stack” from a consortium of big-name vendors.

With all the talk of cloud computing this stack has gone well beyond the desktop, office or even corporate datacentre – You can buy the stack from a vendor consortium to run on-premise and offload some your infrastructure into their IaaS/PaaS/SaaS stack – with the promise of a more joined-up approach to support and services.

In the current landscape Microsoft are in an odd position; Ballmer is pushing them all the way into the cloud stack but at the lower levels they essentially have an open partner model, I would expect to see Microsoft partner with Dell (or even acquire, as has been rumoured for a while) to come up with a “premium”/integrated product line-up; but not entirely stop their traditional OEM arrangements with other hardware vendors.

Cisco would seem to have fired the first shot in this war at HP, maybe the gloves of co-operation will come off for the rest now that people don’t necessarily have to be seen to be playing nicely in the market.

The following table shows my take on the major players and the offerings they have; I’m a realist and a lot of these are recent acquisitions or products so I don’t honestly think in all cases they really do have fully integrated end-end sales, services and support but it looks to be the goal.

5 responses to “The Computing Super-Powers are Aligning Their Stacks”