Vista – clearing out some space

I have had Vista RTM installed on my current laptop since it was released, I’m always running out of disk space – I just have an .iso and VM hording habit!

However I recently upgraded my laptop from a 100Gb disk to a 200Gb one, thinking that should be more than enough (famous last words..)

But not 3 months later I’m out of space again, but this time I’ve even purged all the VMs I no longer use and I am still looking at an OS/app footprint of tens of Gb, so I did some digging and aggressive housekeeping and turned up a lot of downloaded and old application data that has built up over the last couple of years.

I used TreeSize Free which is great for sniffing around all those obscure and redirected Windows folders (screenshot below is after some general housekeeping, but still!)

My data not unexpected and I can live with this

with a bit of digging I found the worst culprit(s) that I didn’t know about, AppData so I did a bit of exploring… 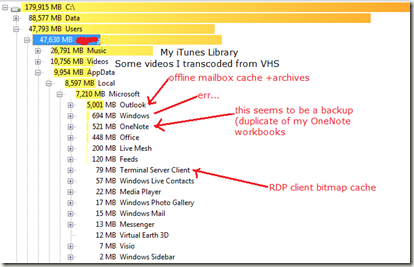 The size of the AppData\Windows folder was a bit of a surprise, as was the size of the temp internet files folder as I exclusively use Firefox, however this is temp files where IE is embedded into MS apps like Outlook and Office and this is where it stores its temp files.

It seems  lots of apps use this directory to store their data (as the name would suggest 🙂 but don’t clean up after you’ve uninstalled them – Xobni, I’m pointing the finger at you, Spotify and Google Earth also seem to keep data here, assume that’s a cache of downloaded content.

Apple seem to leave old iPod updates in here too

Apple everything… thanks for eating up all my disk space, I’m sure I need to keep iTunes 7.x ready to install!

So, in summary – TreeSize Free is an excellent tool for going exploring and visualising your actual folder by folder disk usage, you can also delete folder from within it.

by doing this I regained a serious amount of useful disk space!

Ironically, I’d never actually seen this screen before.. Windows Key – X and it pops up the following screen so I can get one place to find the Dell extensions and the MS normal control panel applets in one place that are relevant to “mobility”.

James O’Neil‘s post on where Microsoft went wrong with Vista for the tip, maybe thats one of the areas 🙂

For the record my laptop flies with Vista, and I agree with James’s point about suspend rather than shutdown reboot with suspend/resume it’s ready in < 5sec .. so why continually shutdown etc?

I hardly ever reboot my laptop other than to (un)install some software and suspend/resume works flawlessly, (unless I try to do it with my laptop’s built in 3G cell modem connected to Vodafone – as it will fail 1/2 way though and slowly cook in my laptop bag – but that’s a driver issue I assume rather than the OS).

as Eileen Brown discusses here I also frequently use MSCONFIG.EXE to keep the startup crapware free and the services stripped down to bare minimum…although I think Vista should police this a bit better.

You see, it’s all about the choices with Vista 🙂 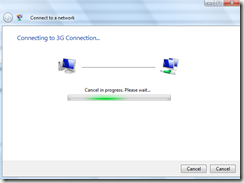 I use Firefox for 99% of my Internet activities, however there are still some web sites and applications that won’t work fully (or at all) within Firefox.

Normally I use the IETab extension to render particular tabs within Firefox using the IE render engine.. this allows all my browsing to stay within one tabbed Window and is easy to use.

However we have an SSL based VPN for corporate access and I occasionally directly access some HP iLO’s Neither work well with Firefox; I like to spawn them both in a separate IE window to keep them separate from my normal browsing.

If I create a shortcut to these URLs from the desktop etc the default URL handler is Firefox.

So a quick cheat is to create a shortcut to IE then adjust the shortcut properties (right click, properties) and append the URL you want to open in IE under the ‘target’ entry.

Installed Windows Vista SP1 and Have No Sound?

There are probably a number of reasons for this, but I’ve come across a number of people recently that have installed Vista Service Pack 1 from the Microsoft Web site (note: not via Windows Update) following articles on the web about its availability (like mine) and have since had problems with sound or other devices not working.

If you read this KB article you’ll note that cause 5 says if you have some particular devices you will not be offered SP1 by Windows Update as there are not yet SP1 compatible drivers.

I don’t know for certain as I don’t have any of these devices on my laptop by I would think even if you downloaded it manually the SP1 installer would warn of this; so maybe those people just chose to ignore it – none of them could remember 🙂

To be fair to Microsoft I think this is a good idea, previously there would have been no check mechanism for known incompatible drivers, this is definitely a step in the right direction to protect people from themselves 🙂

Pasted from the KB article…  some of the problematic devices are listed below;

•For x86-based computers: P17.sys – all versions (This was originally a Windows XP-based driver.)

About to install Windows Vista SP1 on my Dell D620 Laptop, if I don’t report back for a while it’s all gone horribly wrong!

Interesting to note it makes sure you have your laptop plugged into the mains before it will let you continue.

I downloaded it here 434Mb download, interesting to note the filename Windows6.0-KB936330-X86-wave0.exe be interesting to see what the wave0 bit means with later releases.

I’ve not had any real problems with SP0, but might as well put it on; few colleagues reporting better speed… but think my disk definitely needs deranging anyway so thats probably more relevant. 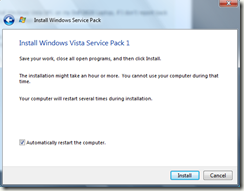 More Useful Things You Can Do With ImageX

James O’Neil has a good post here – an example of how he used ImageX to quickly build and maintain his own vista system image with his typical apps.

Also handy for reference as he shows how to split very large images across multiple CDs using the /split switch.

What a handy tool; if you download the app you can select which Microsoft OS/Applications you need patches for and it will download them all via the Windows online catalog to a source directory and then compile a script to auto install them all – it will even generate a .ISO file and handle dependencies and reboots – v.handy (and more efficient) if you need to quickly present it to a bunch of virtual machines with no Internet access or are on a site with slow internet access.

Excellent; now as far as I know Microsoft have no mechanism for doing this other than downloading all the patches manually… even with the Vista RTM images I built last week it had nearly 100Mb of OS patches alone!

You can even get all the patches for everything and it will compile it into a DVD .ISO image – I’ll definitely be using this – hopefully you can use the info it downloads to slipstream update a vista .WIM image – will have to try that in a couple of weeks.

My home office setup has a 20″ widescreen Dell TFT which I use with my laptop an elevated docking station – my laptop has a rather low screen resolution as it’s quite small so this is a great dual monitor setup. The widescreen is handy for keeping a web browser open for referring to online documentation or and working on documents or large Visio diagrams.

The only gripe is that a lot of web pages (like the BBC) waste a lot of the widescreen real-estate as they format (or don’t re-format) for different screen resolutions.

The Split Browser Plugin for Firefox (my favourite browser) that allows you to essentially have multiple browser sessions and sub-tabs in one full-screen Window.

it has load of options – if the screen layout gets a bit confusing you can bring all the split pages back to one window with multiple tabs and vice-versa.

The (also useful) IETab plug in means some of those sub-pages can also be rendered using IE – but all within Firefox.

Firefox has such a good community of developers and I have always been able to find a plug-in that does exactly the odd-feature I “need”.